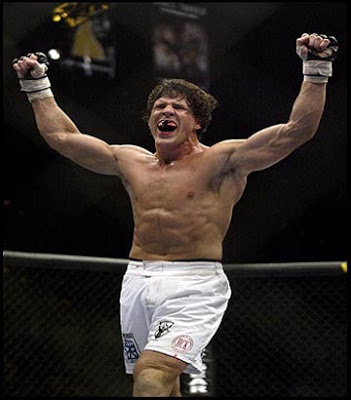 Evan Tanner died in the California desert in the last few days. He left for the desert after making some blog posts, and joking about how seriously the internet pundits took his latest adventure. “It’s no ‘Into the Wild’ thing” he scoffed. And yet a very simple miscalculation cost him his life. The world lost a special person when he succumbed to the heat and dehydration of the unforgiving desert.

Evan’s performance in UFC 51 cemented my love of MMA, and made a hardcore fan out of someone who’d been watching the sport for a few weeks. I don’t say that just out of respect…his destruction, seemingly on nothing but willpower, of David Terrell branded the sport into my consciousness. His pure elation upon victory brought tears to my eyes, like his death does tonight.

Evan Tanner wasn’t perfect by any means. He had demons, booze among them. He walked up to the edge of killing himself with alcohol, and walked away from it. That’s not something to be proud of, that walk, but the turn away is difficult, and admirable in its own way. Nearly killing yourself with liquor is nothing heroic.

To me Evan Tanner was a magic name, that stood for a man doing his own thing, and taking the consequences, whatever they may be. That may seem simple, but I didn’t have a father figure growing up. I had to find, and still have to find, men who represent what I want to be, who I want to be. Evan wasn’t everything I hope to be in this life, but his spirit was one I hope I can capture a tenth of, emulate a tiny bit. Looking into the face of existence, and laughing…that’s what I take from this. That big, open laugh you got to see on Tanner’s face, exulting in being alive.

May we all exult so in our lives.

**More:
Kid Nate has a great piece up on Bloody Elbow, and he included the video below. He also mentioned something that I’d thought of but failed to mention, and it deserves mention: Evan was an innovator in the sport. His elbow work and combination of the muay thai clinch, American wrestling, and dirty boxing made a template that permanently changed MMA. While his last forays into the cage didn’t result in victories, they were, without a doubt, successful. Success is how you live, win or lose.

1 thought on “In Memory Of Evan Tanner”