with contributions from Nicholas Bailey

As the aftershocks from Evan Tanner’s passing begin to quiet a little, I got back to reading and thinking on the light heavies. UFC 88 changed the division in some truly stunning ways. One of the monsters of the LHWs is looking a lot more human and a lot older. A former denizen of the weight class returned with a resounding win over a young, inexperienced opponent. At 205, there’s an intriguing matchup that presented itself when all was said and done: Chuck Liddell vs. Rich Franklin. While making a fight like this happen carries risk for the UFC, it also offers rewards, for the fighters, the organization, and the fans.

While little in Chuck Liddell’s game has changed over the years, the league seems to have caught up with him. Rashad Evans is not a better striker than Liddell. He just had an opening he was looking for, and his focus and handspeed allowed him to charge through it. Even with a loss, Chuck Liddell is relevant. His dominance as champion was legendary, inspiring legions of fans as well as arguably making Liddell the face of the UFC, if not MMA as a whole. Going 1-3 in boxing is a career killer, but in MMA it’s a bump in the road. Plenty of world-class fighters have significant losses, partly due to the smaller pool of talent and the fact that older, more experienced fighters get matched up with younger fighters. Liddell has the history and skill set to match up with most anyone out there. He has a long road to get back into title contention, however…perhaps impossibly long. 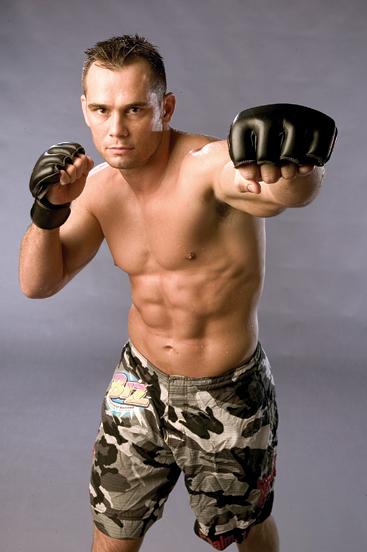 Rich Franklin is also interested in contending for the 205 belt. After a strong run as middleweight champ, he ran into a cold, hard wall named Anderson Silva, and is now looking for a shot at his old weight. At UFC 88, Rich tore Matt Hamill apart, showing the great, dynamic striking we’ve come to expect from “Ace”. His kicks were brutal and snapping, and he threw extremely fast and effective combos while moving easily around the cage. Hamill looked terrible, to be sure…but how much was Franklin making Hamill look terrible? A few leg kicks from Franklin will make anyone want to give up.

So here we have a tested champion on the ropes, his career seemingly on the down slope, having won only 1 of his previous 3 fights. There’s another tested champion, denied his former place, moving into new territory. Both will stand in the pocket and trade. Both are tremendous PPV draws, as well as media-friendly. If Chuck wins, he gets one leg out of the grave he’s hopped in over his last four bouts. If Franklin wins, he adds a bold headline to his contender’s resume. Both could count on a massive payday. Perhaps a showdown with the winner (if the fight materializes) of Lyoto Machida and Shogun Rua.

Objections can be raised to the scenario. Chuck is near the end of his career. Should he be fighting contenders, or should the UFC be attempting to set up “superfights” against long-time rivals (or, its been rumored, heavyweight rivals)? Liddell wants to contend for the belt. He’s always been clear in that regard. Setting up Liddell in squash matches doesn’t work…he doesn’t seem to care, and delivers lackluster performances, seemingly impatient to be done with the non-title fights (the Silva brawl was a major exception). A win over Franklin would catapult Chuck back up the rankings, at least into a number one contender shot at some point next year, knowing Dana White. That’s what Chuck wants, and if the fight is framed that way he’ll fight anyone on earth.

In Rich’s camp there may be objections as well. Should Rich Franklin be fighting a fading former champion, or other contenders (Thiago Silva, Lyoto Machida, etc), or even fighting for the title? There is precedent for giving recent belt-holders fast title shots (Henderson, Couture, etc). A Franklin fight against the winner of Forrest Griffin vs. Rashad Evans would get one of the UFC’s poster boys onto the top of a PPV card. Of course that’s predicated on Rich winning.

Overall a fight pitting Rich Franklin versus Chuck Liddell would be a winner for the UFC. Fan interest in seeing to legends match up would be huge. Add in legitimate title implications and the fact that neither star’s glow would fade dramatically, and you end up with a great main event in the making. Of course the people who would really come out on top would be the fans.