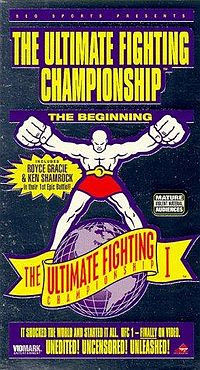 Click the stars to rate how good you think UFC 1 was.

The event was broadcast live on pay-per-view and later released on home video.

UFC 1 used an eight-man tournament format, with the winner receiving $50,000. The tournament had no weight classes and consisted of single-round fights to the finish. The match only ended by submission, knockout, throwing in the towel, or referee stoppage due to a severe cut or injury. No gloves were allowed to be used by the fighters.

Despite being billed as having “no rules” there were limitations on what the fighters could do, including no biting and no eye gouging.